SCHMIDT YACHTING is delighted to announce the addition of the Long Range Gentleman Motor Yacht THEMARA to our sales fleet! 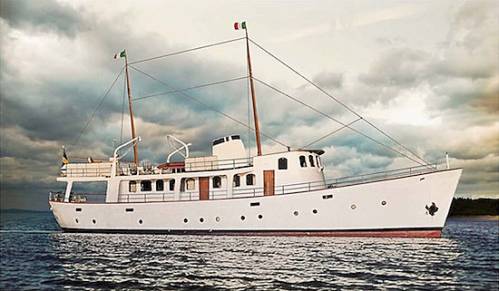 THEMARA, designed by the Scottish naval architects G.L. Watson & Co. was built according to the traditional lines to Lloyds class by Ailsa Shipbuilding, Troon, Scotland in 1962. She was previously named La Bimba, Fair Lady, Atlantis of the Seven Seas, Morning Watch and THEMARA.

This compact ocean-going yacht has a top speed of 11.0 knots and she boasts a maximum range of 4,000 NM when navigating at cruising speed, thanks to her twin Gardner diesel engines (now completely rebuilt). She has cruised extensively in all latitudes including a circumnavigation starting in 1988. She was also a support vessel for the filming of Luc Besson’s Atlantis.