SCHMIDT YACHTING is delighted to announce the addition of the 212 ft William Gardner Schooner ATLANTIC to our Listings ! 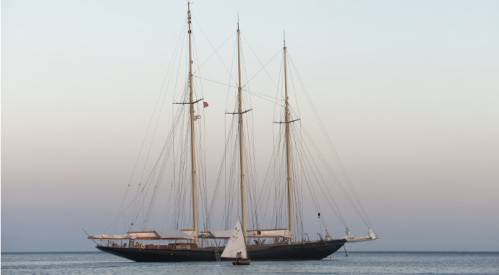 The current ATLANTIC is the replica of legendary ATLANTIC which was commissioned by New York Yacht Club member Wilson Marshall, Atlantic and which was launched in 1903.
After owning, restoring, rebuilding or recreating a number of famous yachts such as Thendara, Aile Blanche, Borkumriff, Zaca a te Moana and most recently the Herreshoff racing schooner Eleonora, Dutch yachtsman Ed Kastelein planned his ultimate masterpiece: the recreation of the 3-mast schooner ATLANTIC.
The project was certainly his most ambitious; with her length over deck of 185 feet (56 metres) she is the largest classic racing schooner ever to be recreated. Ed Kastelein was determined for her to be the way she was when she wrote history in 1905, her original lines were honoured to the finest detail and her sail plan is identical to that of her victorious 1905 Transatlantic Race which made her immortal in yachting history. Above all, she is again breathtakingly beautiful, turning heads wherever the wind takes her.
ATLANTIC's dimensions are simply incredible; over deck she measures a remarkable 56 meters. Her graceful sheer line and long overhangs accentuate her grace while her waterline length of 42 meters and narrow beam are a promise of unmatched speed under sail. Her spars tower some 45 meters above the waterline and support a staggering area of 1,750 m² of sail, more than two and a half times that of the already awesome J-Class yachts.
Price on request.